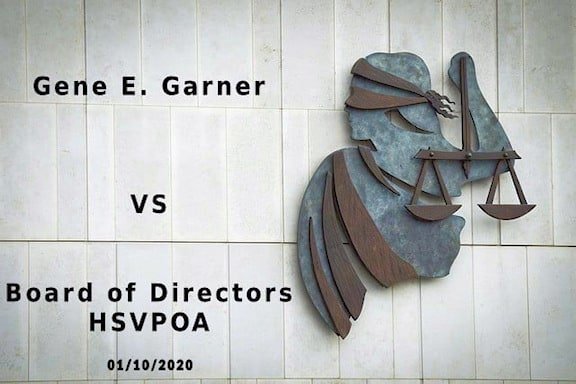 I have attempted to explain the hearing to the best of my ability.  I am not an attorney, and I am certainly not a trained court reporter with a fancy transcription machine. This endeavor is an effort to provide a broad view of what transpired in the courthouse. While I tried to accurately portray the case, there may be slight errors in my reporting. For instance, in my notes I wrote “amend”, but I think in some instances it was actually stated as “revoke and create new”, as that makes more sense so that is what I reported. The words, “amend”, “rescind”, “add to” and “revoke” and “create” were stated many times by both attorneys and it was difficult to keep up.

This case came to be heard in Saline County Court, Division III under Judge Grisham Phillips at a few minutes past 9:00 a.m. on January 10, 2020.  This is close to a full year after the original complaint was filed. The courtroom temperatures were frigid on an overcast day in Benton, Arkansas.

Present in the courtroom were :

Judge Philips asked for the parties to identify themselves.  Plaintiff Gene Garner was represented by Philip Montgomery of Legacy Law Group. HSVPOA Board Director Cindi Erickson was represented by E. B. (Chip) Chiles IV of  Quattlebaum, Grooms and Tull.

Judge Phillips stated, “I am a nominal member of the Property Owners Association.  I am not sure exactly how it works.”  Judge Phillips has a friend who sold him a membership so he may play golf at Property Owner rates.  Furthermore, the judge went on to say, “I don’t think I have a conflict of interest.”

Both parties agreed that they were comfortable proceeding in Judge Phillips courtroom.

Judge Phillips inquired as to what the changes in 2018 entailed

Attorney Chiles said the changes “flushed out details”.  The original Protective Covenants was a three-page document.   The 2018 Protective Covenants gave greater detail into what the general requirements were.  A lot of these were already practices followed by the POA.

Mr. Garner said the new Protective Covenants were a code.  Attorney Chiles said, “I am not sure I agree with that.”

Was there anything new in this case?

Judge Phillips asked about Attorney Chiles’s argument that there was nothing new in the case than what was previously decided in the past lawsuit.

Attorney Chiles said the specific amendments were different.  Mr. Garner “challenges the authority of the Board”.  The governing documents do not limit the Board’s authority to amend, rescind or add to the Protective Covenants.

Judge Phillips asked if HSV is an incorporated municipality

Attorney Montgomery said, “It is a privately gated common-interest community.”

Should Judge Phillips be required to read the whole 119 pages?

Judge Phillips asked Attorney Chiles if he should be required to read the whole Protective Covenants to determine what are amendments and modifications and which ones are new restrictions.

Attorney Chiles said he doesn’t think Judge Phillips should be required to do this.

Does the Board of Directors have GREAT and BROAD authority?

Judge Phillips asked Attorney Chiles if he thought the BOD had great and broad authority.

Mr. Chiles agreed that the BOD has great and broad authority.

What would prevent the POA Board from doing whatever they wanted to do?

The judge asked, “what would prevent the POA from doing whatever they wanted to do?”

It is a separate issue whether the BOD takes reasonable actions and possibly this may be challenged in the future.  This lawsuit is about whether the BOD had the authority to do what they did.

Have any Property Owners been affected by the new Protective Covenants?

The judge wanted to know if since 2018 have any of the Property Owners been affected by the new Protective Covenants.

Mr. Chiles did not know.

Judge Phillips talked about family that lived in another state in a POA or HOA and they were not allowed to park a pick-up truck in their driveway or front of the house.

This case also reminded the judge of when he lived on an Airforce base for a year.  There were many restrictions on the property.  Being a rebel, the judge’s father mowed down the bushes in protest.  The shortened bushes were still in compliance with the rules of the base.

The decision was put on hold

Judge Phillips asked, “Has anyone been harmed, so far?”

Attorney Montgomery stated he has received letters from people saying they have been harmed, but they were not part of this action.”

The Time is Now HSV!