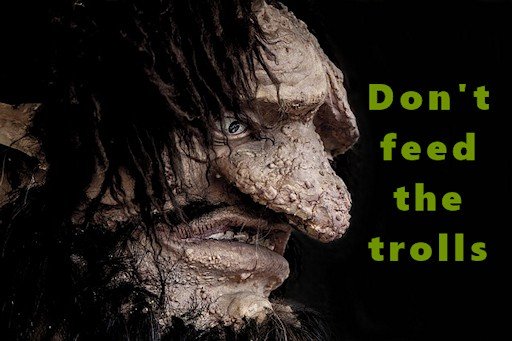 (HSV) Silence of the Trolls

Since we left our primary residence in the village back in July I have been following this website, and HSV People Facebook page closely. I have noticed that there has been a significant increase in the number of anonymous posts in response to both articles and comments. Some of these are, undoubtedly, from people who wish to remain anonymous for fear of some kind of “reprisal” from the powers that be. While some may feel that is an unlikely possibility, the recent incident where HSV Police were dispatched to a property owner’s doorstep to enquire about a Facebook post that stated “Nalley must go” certainly lends credence to that point of view.

However, a number of these anonymous posts seem to fall under the definition of trolling. Here is the Wikipedia definition for “Internet Troll“:

“In Internet slang, a troll is a person who starts quarrels or upsets people on the Internet to distract and sow discord by posting inflammatory and digressive, extraneous, or off-topic messages in an online community (such as a newsgroup, forum, chat room, or blog) with the intent of provoking readers into displaying emotional responses and normalizing tangential discussion, whether for the troll’s amusement or a specific gain.”

There is a key difference between being controversial, voicing different opinions or raising ancillary issues and trolling – and that is the intent! Trolls do not want to contribute to anything, all they want to do is to distract from whatever issue is under discussion. Here is an example from a recent post about funding on the HSV People web site that seems to fit the definition precisely (I have left the spelling, and poor grammar, intact):

I think all of you need to move out of the Village. You need to be in a community where only what you want to participate in exists. Why any of you want to live here is bewildering to me. You all knew these amenities were going to be here, and none of you living here at the time prevented John Cooper from building more. than you want. Those of you who moved here a short time ago knew what was here. It is a community with a lot of amenities. It is the responsibility of all of us. to support. the community we live in. Because you don’t like or use something don’t mean everyone agrees with you. Shooting down amenities in this community is assinine. Just move and find a community more to your liking. Let the rest of us find. new neighbors to replace you.

Clearly this has no direct relevance to the topic under discussion (which was about the POA subsidizing loss-making operations and the CEO euphemistically calling it “funding” repeatedly). Not only that, it adds no value whatsoever and is clearly intended to provoke people and, presumably, to get angry responses. This is what trolls do.

Unfortunately, there is no realistic way to prevent trolls from posting on open web sites. However, there are definitely steps that can be taken to reduce their impact. The following is an abstract of the key point from Ellice’s blog on the subject: “12 Ways to Stop Internet Trolls from Ruining Your Blog”

A solid policy won’t completely deter trolling, but it will set the tone for engagement in your online community.

If comments are disrespectful and attacking, you don’t have to let them onto your site in the first place. If you moderate comments before they post live, it may take the wind of a troll’s sail: why post something to stir the pot if it won’t even be seen?

Even when you’ve done everything you can to troll-proof your site, the bad guys may still come knocking. Use these strategies to craft replies to your haters — and to determine when silence says it best.

Trolls feed off of attention; they want to see people get riled up at their comments. In fact, research shows that the silent treatment is often the most effective. “The worst thing you can do is feed the trolls,” Garvin says. “If someone has an agenda or is just being a jerk, the best thing to do is ignore the person.”

5. Let Your Community Take Care of It

Chances are that your regular supporters far outnumber the haters. So, when a troll comes along you can just sit back and watch your peeps take care of it.

6. Use Humor and Lightness

Trolls are in the game for an all-caps NEGATIVE response. Turn the tables and kill them with kindness — or at least humor and lightheartedness. Respond to trolls with a quick and witty quip, then move on with your day.

7. Stick to the Facts and Make Corrections

Keep any responses, especially if you are concerned about your brand, impersonal and professional. If your troll is making an argument against your ideas based on faulty facts, set the records straight if you feel like it is necessary; for example, to avoid confusing or letting the troll mislead your readers. But don’t argue or engage the commenter, or you’ll tread into the territory of “feeding” the troll. Use facts, not emotion.

Make your troll eat their words or maybe just respond by repeating word-for-word what the troll said to point out just how ridiculous (and non-threatening) you find them, which may take a bit of the fun out of their trolling.

Trolls are probably the worst part of the internet, especially for content creators like you. But they don’t have to ruin your day or silence your voice — remember, they are just trying to piggyback off of your success and audience; they haven’t built anything themselves.