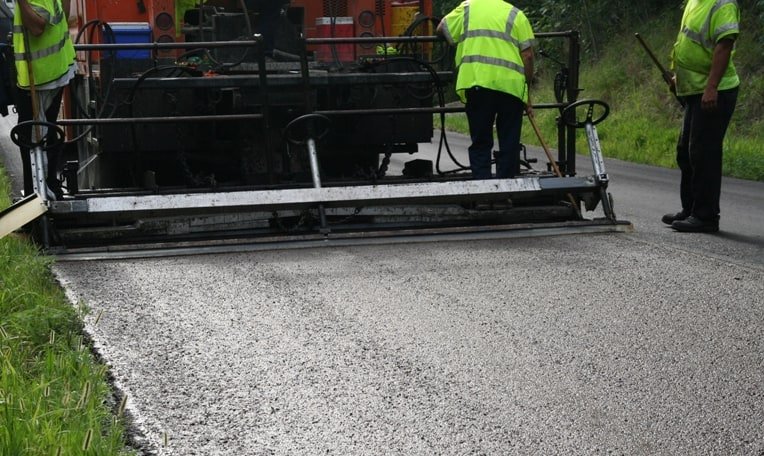 When you walk into COO Jason Temple’s office and see him sitting behind his spotless desk staring up at a 45-degree angle, you wonder what could be so interesting up there.

Taking a seat you turn and see the largest computer monitor you’ve ever laid eyes on.  The flat-screen monitor would delight any couch potato.

Temple, an engineer by trade, makes good use of the big screen.  Over the next hour and a quarter, he calls up one spreadsheet after another.

Central to our conversation is one listing every road in the Village.  It shows when the road was built, the street’s length, when it was last repaved, how many houses are on it, if it has cracks or surface problems and how it was most recently rated.

I’ve been critical of how little road maintenance has been done in recent years in the Village.  There was a time when a committee of Villagers working with the Public Works Department recommended resurfacing 30 miles of the Village’s 472.3 miles of paved roads every year to keep our roads in good shape over the long haul.

No resurfacing has been done since 2016.

As the POA’s chief operating officer, Temple is responsible for the water, sewer, sanitation, roads, building maintenance, grounds and fleet of vehicles.  So it is with considerable authority he filters the data on his big-screen until it showed there are 117 miles of Village road rated at 85 or less.  Below 85 is when roadwork is needed.

His spreadsheet also shows 67 miles of those roads have one or no houses, leaving 50 miles he thinks the POA should be focusing on.

Members of the Public Service Committee, composed of Villagers who spent much of their working lives dealing with roads or other municipal services, are out this fall surveying roads in the eastern section of the Village – a third of the Village’s total.  Their ratings will be added to Temple’s database.

First, crack-sealing by a team of POA employees and from an outside contractor will be working between now and next March to fill cracks which can lead to serious erosion of the roads.  This hasn’t been done for several years.

Second, as soon as the POA board approves the 2020 budget and Temple knows how much money will be available for road maintenance, he will request bids for resurfacing streets most in need of repair.

And, by next June, with his data base up to date, he and his team will prepare a three-year road plan to get the Village back on a firm maintenance schedule.

Temple is convinced the most economical approach to this work is to “micro-surface” the roads – covering the street with a 3/8th-inch layer of asphalt.  This costs about $50,000 a mile and should extend the street’s life by about eight years.

Crack-sealing each targeted road before it is resurfaced also will be done.  Crack-sealing costs about $8,100 a mile and adds two to five years to the life of a road.

He hopes to have enough money to repave about 24.5 miles of roads next year, as well as enough for sealing cracks in most of the parking lots at POA properties.

Temple, whose team just successfully completed restoring and upgrading 59 lift stations used in the Village to pump sewage up hills and down to treatment plants, is studying how to replace all of our mechanical water meters with new electronic devices.

If that doesn’t excite you, it should.

The new digital meters would more accurately measure how much water you receive and automatically transmit the data back to the POA for billing purposes.

The new devices, which are about the size of a 16-inch softball, include a battery that lasts up to 20 years.

Before you think this is a hair-brained idea, consider this: The project would pay for itself in less than five years.

Tests show aging meters are costing the POA between 7 and 15 percent in revenue from water sales.

Next year POA revenue from water sales will be about $2.85 million.  If new meters led to 10-percent more revenue, it would take less than five years to pay for the new meters.

Other benefits include eliminating the need for meter readers since data would be transmitted straight to POA’s computers.  The system would be able to instantly identify breaks in water lines or some other problem in your home and notify you and/or the POA.  And the POA would be able to bill us monthly instead of every other month, thus improving cash flow.

Temple says a two-man team could install new meters at all homes in a year.

There.  I told you it was exciting.

(HSV) Silence of the Trolls