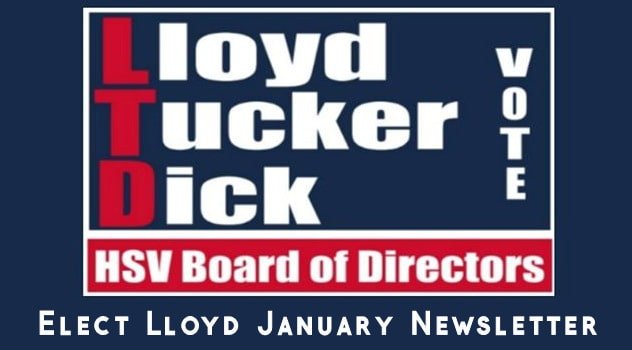 It is late January and the election is fast approaching.  We started this campaign with all candidates going solo with their campaign activities. But it seems that our supporters had a different idea and they have started the LTD movement. Lloyd Sherman, Tucker Omohundro and, Dick Garrison are the LTD in the movement. The public has spoken and all three candidates listened because all three are very interested in providing what YOU want to know and to happen.

There is an article about our election and the five candidates in a recent article published by the Times Record that caught my eye. You can read the full article from the Times Record by clicking here, and the following are a few of my thoughts about each candidate mentioned in the article.

I found it interesting that the first candidate listed was a newcomer to the Village, Nikki Choyce. In her comments she states, “… I am new to the Village…” She further states “My only reason for running for the board is to be a true and independent voice doing what’s in the best interest for Hot Springs Village”. Well folks, I do not understand how she can be abreast of the Village issues and problems, much less know what you, the property owners want, when she has only lived here for eight months!  Furthermore, she fails to mention that she is the chair of the CMPAC, Comprehensive Master Plan Advisory Committee.

Next on the list in the Times Record article is Kirk Denger, a long-term resident in the Village. In this article, he gave some of his work history then stated, “All major expenditures or drastic changes to our community should be voted on by property owners.”

Isn’t this is a Board function and that is why we elect Directors to serve on the board?

Dick Garrison is the next candidate in the list. Last year he outlined steps he felt were needed to heal Hot Springs Village. They included, changing bylaws and policies to give the Board involvement in operational issues, rework the marketing programs, change the way the POA plans, presents and reviews our financial results, and reduce subsidies. He never had support from the rest of the board to bring any of his agenda items to a vote. The board members at the time had a 4 to 3 majority and used it to vote him off the Board of Directors. He also stated, “This year, if we elect Lloyd Sherman, Tucker Omohundro and me to join with Diana Podawiltz on the board of directors we can achieve these goals.”

The fourth name on the list is Tucker Omohundro. He has been a resident of the Village since 1985 and is an active home builder here in the Village. He also worked for CCI (Cooper Communities Inc.) from 1983 until 2006. His final position with CCI was Regional President for Hot Springs Village, Bella Vista, Rogers and Benton. He knows the inner workings of Hot Springs Village including the rules, regulations, covenants, etc. He was on the Architectural Control Committee (ACC), and later was the liaison between the ACC and CCI. He stated, “I respectfully ask for your support of myself, Lloyd Sherman and Dick Garrison.”

The fifth and final name on the list is Lloyd Sherman. His working background demonstrates he has the experience to be an effective Board member.  In his consulting business, he put his acquired skills to work helping other business owners. He was hired to be a change agent. His job was to identify and then fix issues that were leading companies toward bankruptcy. He has publically stated that he, “intends to be YOUR advocate on the Board of Directors and represent YOUR interests, both resident and non-resident property owners.

Well, friends, this is why I ask you to support Lloyd Sherman, Tucker Omohundro and Dick Garrison in the coming election. The LTD team is our key to putting the POA to work doing what they were designed to do in the first place.

Campaign season is in full bloom and activities are coming at us in a rapid fashion. While we started this year’s campaign activities early and running an independent campaign, circumstances and supporters suggested they would like to put support behind me, Dick and Tucker and they came up with an acronym of LTD. As we three met and discussed our individual platforms we recognized we had major agreements on the topics we discussed. So while I remain committed to the principles I have been supporting for the last several years, I ask that you give serious consideration to supporting the three of candidates of LTD. While we’re 3 individuals with varying experience and opinions, we all commit to the following

It is imperative that this election ensures the voice is returned to the property owners and with your support and vote we can regain control of the majority and immediately take steps to take our Village back.