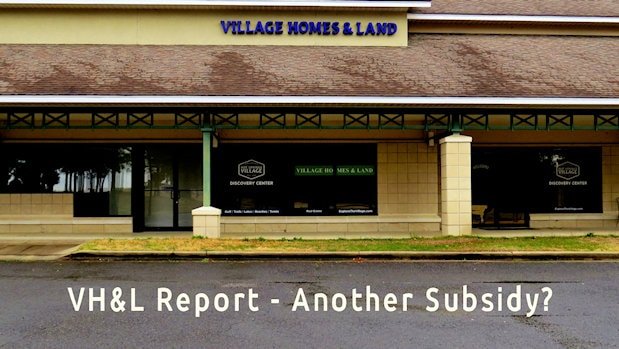 No financial justification for Village Homes and Land

Given the current climate in the Village along with the division that exists as to the direction the Village appears to be taking, reports issued will most likely lean one way or the other and not be fully objective. I will admit on the front end of this report that this one will not be any different. I have been very clear that I am opposed to the formation and continued operation of this assessment draining operation. Nothing being done by this department of the POA couldn’t be done by the real estate community at no cost to the property owners. For reasons unknown to the property owners, the POA promotes the need for what has become yet another SUBSIDY.

In last year’s budget presentations, we heard that only three (3) of our recreational amenities were NOT losing money, where the Dog Park was held up as the one example where we weren’t losing money.  So, the financial justification for operating a division that can be done by private enterprises at no cost to property owners remains puzzling to many of us. That being said, let’s move onto an analysis of exactly what this operating department within the POA has accomplished during their tenure. Please refer to the attached report for further details on each category.

NOTE: This information is from the Central Arkansas MLS and does not include other properties like POA-owned lots. Only information processed through the MLS!

Listed by other brokerages

Listed by Other Brokerages – A total of 13 homes listed by various other for-profit brokerages were sold by VHL. Resulting commissions for these sales generated $78,853.25 in brokerage commissions. In the for-profit world, half of that amount would have gone to the agent who handled the transaction. Four (4) of these properties were sold in 2017; seven (7) in 2018; and two (2) in 2019 through the first six months. So as to be clear, this $78,853.25 are the results for over two years in operation.

Part of Builders Guild – The two properties appear to have been built by the Builder’s Guild members and were not sold by VHL but were picked up and sold by ReMax. It also appears contracted listing percentage was 5% per property and 9 Hendaye had a 3.5% co-brokerage fee. These two (2) would have rendered $11,340 in commissions bringing the overall production total of VHL to $90,193.25.

Built/Building – This category shows houses that are under contract but not yet closed. The only property that doesn’t have a Pending Closing Date (PCD) is 42 Cresta Way which has been showing as taking backups for several months now. If all commissions were listed at normal rates, this category would generate another $40,310 in “revenues” to VHL.

Note: These are pre-sales and not closed homes!

Lots Listed by VHL – MLS only shows one lot that was listed by VHL and sold by VHL. This category generated another $750 in POA “revenues”.

Lots listed by others

Lots Listed by Others – MLS shows these lots listed by other brokerages but sold by VHL adding an additional $3,520 in POA “revenues”.

In what we will call two (2) years of active operation, VHL has generated $94,463.25. You cannot count the $40,310 because until they are closed and funded, they remain prospects.  We cannot count the revenues associated with Discovery Packages because they are essentially “pass-through” revenues (revenues and costs off-set each other).  There is no for-profit operation that could operate on essentially $47,000 a year in revenues and pay half of that amount to the agent who sold the property.

The question remains, why do we need another assessment draining operation to perform tasks that were already being handled by the private for-profit businesses in the area? I would love to have an answer to that question. IF there was some justification for the existence of this operation, why is the marketing program designed specifically to monopolize the market? For-profit brokers are not allowed to sell the Discovery Package!  Let that sink in! It has been reported that Tellico Village experiences 500 Discovery Packages a year. Do you know why? Because they involve all realtors and builders in their program.  Even with the results shown of late by VHL, there is no way to obtain the growth called for in their cherished CMP without involving the entire real estate community.

So again, I ask!  How does a non-essential, unnecessary, assessment draining operation like this make any sense in the scheme of the Village’s development? Couldn’t the money being spent on this operation be spent more productively on say, I don’t know, INFRASTRUCTURE?

Edited and formatted by Cheryl Dowden