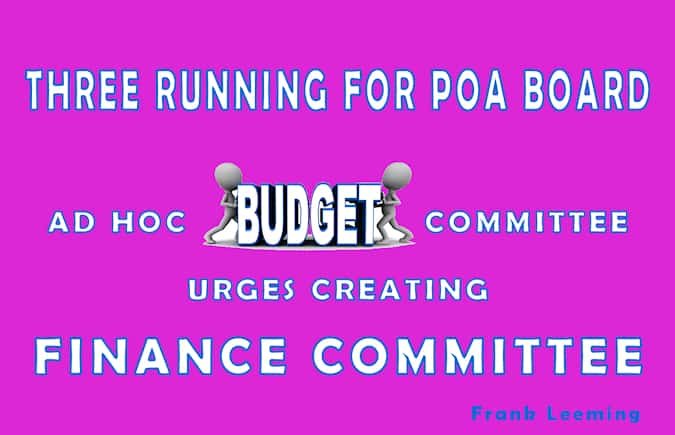 Three good candidates are ready to run for seats to be filled in the next POA board election in March:

Dick Garrison, a retired business executive who was kicked off the board by the incumbent faction for reasons never made public.

Lloyd Sherman, also a retired business executive with experience in the Village real-estate market and an outspoken critic of the current board and POA CEO Leslie Nalley.  He was one of 10 candidates for the board in the last election.

Tucker Omohundro, a successful Village builder and long-time executive in the Cooper organization.

The proposed 2020 POA budget wasn’t approved by the board last week.  Some thoughts about that:

CEO Lesley Nalley: “We have way more to do than money we’ll ever have.”

Vice-chair Tormey Campagna: “It’s pretty clear to me and most of the people on the board that the revenue coming in the door is not necessarily equal to what needs to go out the door.  And sometimes these moves (of funds) from one place to another complicates our ability to explain it to ourselves, and also explain it to the public, so they can understand we just can’t do everything, at least with the revenue line we’ve got at the moment.

“We just keep kicking that can down the road until eventually the can’s bigger than my foot will kick.”

The committee also found “compensation in the 2020 budget is 48 percent of the revenue budget and 14.4 percent more than operating expense.  This seems to be excessive.”

It joined many others in urging the board to create a standing Finance Committee reporting to the board.  When that happens, the four Villagers who did such a good job on the ad hoc committee – chairman Bud Hallinan, vice chairman Wayne Foltz, secretary Dan Aylward, and John Gonzales – should be the first appointed to the permanent committee.