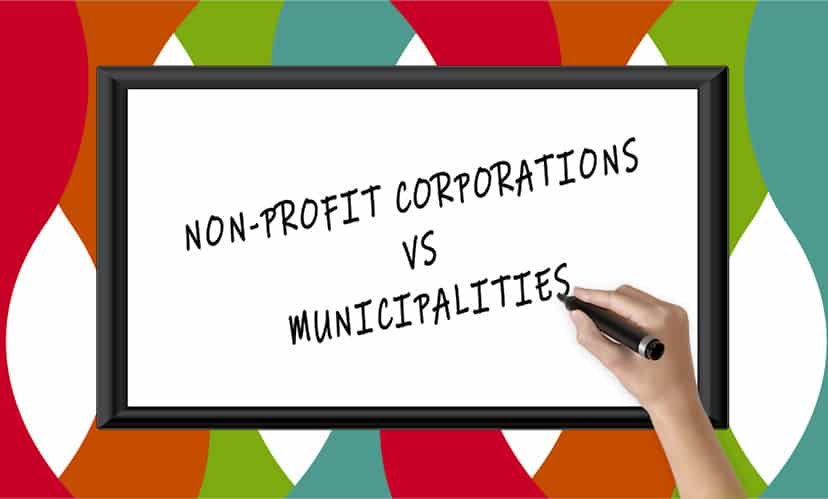 So much discussion has occurred over the last year about what it means to be a non-profit corporation and how it should be governed, many have sought answers to help them understand it and why it’s different from a city or municipality.  To that end, I was recently asked by the POA’s Governmental Affairs Committee to provide them with a comparison between being a non-profit corporation and being a municipality. Based on my experience of 17 years of elected office in a municipality before moving to the Village and my experience of 3 years of elected office on the POA Board of Directors 2007-2010, the GAC felt I had the necessary expertise to succinctly explain the similarities and differences between the two, in language we could all understand.

This article was submitted to the GAC and was discussed at its January 2020 meeting.  POA representatives present at that meeting felt it was unnecessary and the topic was something the POA could provide to property owners in a different format.  To date, no action has been taken by the POA; however, the GAC has placed it on their February agenda under Old Business for further discussion.  I agree with the GAC that property owners would like to know the differences.  It is my hope this article will shed some light on the subject. Educated property owners can effect change.

As part of the incorporation, the Declaration was created and adopted.  HSV must adhere to the Declaration which can only be changed by a ballot referendum.  The Declaration describes HSV as “a non-profit corporation organized and existing under and by virtue of the laws of the state of Arkansas, with its principal office located in Hot Springs Village, Arkansas, for the purpose of exercising the functions aforesaid.”  In Section 8 of Article X, the Declaration briefly speaks to the “Duties of the Board of Directors” to address the assessment process.  Other than that reference, the Declaration is silent on the governance framework of the Property Owner Association.  Likewise, the state’s designation as a non-profit corporation does not determine the governance framework under which the POA leadership operates.  That responsibility resides with the POA Board of Directors via the creation of By-Laws and policies, as long as they are not in conflict with either the Declaration or Articles of Incorporation.

Hot Springs Village was incorporated under The Arkansas Nonprofit Corporation Act of 1963, and for 46 years the governance framework was reflective of that.  Subsequently, the Legislature passed the Arkansas Nonprofit Corporation Act of 1993. For the HSVPOA to embrace and adopt it as its guiding document for incorporation, a majority vote from all property owners in good standing would be required; property owners rejected this change in the fall of 2018.  The new 1993 Act provided clear and complete rules of corporate governance, including but not limited to statutory authority providing guidance on the conduct of members’ meetings; statutory guidance regarding the procedures for amending the governing documents of a nonprofit corporation; and statutory standards for measuring the duties of care and loyalty owed by directors and officers to the nonprofit corporation.

Despite the fact that Hot Springs Village is not incorporated under the 1993 Act, our policies and By-Laws have been changed to reflect the content of that document.  In so doing, they have adopted the posture of governing as a non-profit corporation which allows them to be ‘loyal to the corporation’ and not the property owners because that is the format under which a corporation exists.  Directors are elected and put in place to conduct business as a whole unit for the betterment and advancement of the corporation and not answerable to the property owners.

Definitions of a Non-Profit Corporation and a Municipality

A municipality is created by the filing of incorporation documents with the state for the sole purpose of being a municipality and is subject to state statutes in numerous areas.  As part of that process, a Charter is adopted. The Charter speaks to many things, but for the sake of this discussion, it establishes the governance framework under which the municipality will operate.  The municipality adheres to its charter which is similar to its ‘constitution’ and can only be changed by a ballot referendum (much like HSV’s Declaration and Articles of Incorporation). As a municipality, their officials are elected by registered voters in their jurisdiction to represent their interests and concerns.  As such, a municipality is a representative form of government where elected officials meet to debate and make laws on behalf of the whole community, instead of the people voting directly on each issue, law, or policy that is required to sustain their community, often called voter referendums.

Differences in How An Elected Official is Removed From Office

States may vary a little on how to remove an elected official but most have uniform election dates, meaning any municipal election must be held on one of those dates.  A municipal elected body, such as a City Council, has the authority to censure a fellow member of the Council but cannot remove them from their position. That must be done by the electorate that put them in office.  Removal of an elected official must be in accordance with state law: requires sufficient signatures of registered voters to force a recall election and a subsequent majority vote to actually remove them from their post.  In the event the recall is successful, the removed member is eligible to run in that election and any subsequent elections.

State law on removal of non-profit private corporation members is silent, as is the Declaration and the Articles of Incorporation of Hot Springs Village.  The By-Laws of HSV, however, allow for the removal of a seated member by a majority vote of the POA Board for “cause” as outlined in Article VII, Section 6 Removal.  HSV’s governing documents do not speak to or limit a removed member’s rights to seek a Board seat, either to fill the vacancy left by their removal or any subsequent elections.

It is understandable how easily HSVPOA aligned itself with the governance framework of a municipality:  both elect their officers at a community-wide election; both are responsible for exercising prudent financial/fiduciary decisions on revenues; both are funded through revenue streams generated solely by the voters, through taxes, assessments, fees, fines, etc.; and both are responsive to the electorate that placed them in a seat of authority.

Because of the similarities of HSV and a municipality, for 40+ years the elected officials of HSV chose to operate in a quasi-municipal governance framework.  Directors were elected by property owners at the ballot box, exercised their financial/fiduciary responsibilities by making the best decisions at the time to keep HSV solvent and to be a community people would choose to live for the beauty and lifestyle it afforded.  Directors met to deliberate and make laws on behalf of the Village. They were respectful of the property owners that elected them and strove to represent them for the good of HSV.

Approximately 3 years ago, the officers of HSV elected to move the POA to a non-profit corporation governance framework.  In that environment, the corporation is defined as a private entity and Directors adopted the stance they were no longer representative of the electorate but instead stress their loyalty to the corporation.   That is the existing attitude of the Board who can operate in this fashion because the By-Laws and policies have been changed to reinforce this environment.

Recognizing HSV operating as a private entity/corporation carries some adverse effects for property owners.  In essence, it allows the Board to act autonomously without the input from property owners, either directly or through committee work.  Unless so stipulated by the state, it actually allows them to conduct ALL meetings in private (except the Annual Meeting of Property Owners), should they choose to do so.  They could also legally withhold audit results, meeting minutes, and even adopted policies. The HSVPOA Board has, however, adopted Board of Director Policies, Chapter 8, Article 3.A which stipulates that “all meetings of the Hot Springs Village POA Board of Directors shall be public meetings”.  (Some could argue that policy is not being adhered to by the present Board.) But it is unfathomable to imagine the Board of Directors ever taking action to reverse the stipulations in Article 3.A, but the legal option does exist as long as they adhere to the corporate mindset.

I have never advocated moving HSV to an incorporated municipality, nor do I believe that is what is best for HSV.  Bella Vista took that path and they now have municipal taxes and oversight, in addition to POA assessments and oversight.  That is not the answer. But solutions to ease property owners’ angst over the
current climate exist. Time will tell what changes are on the horizon.

Open Letter to HSV Board – Marketing