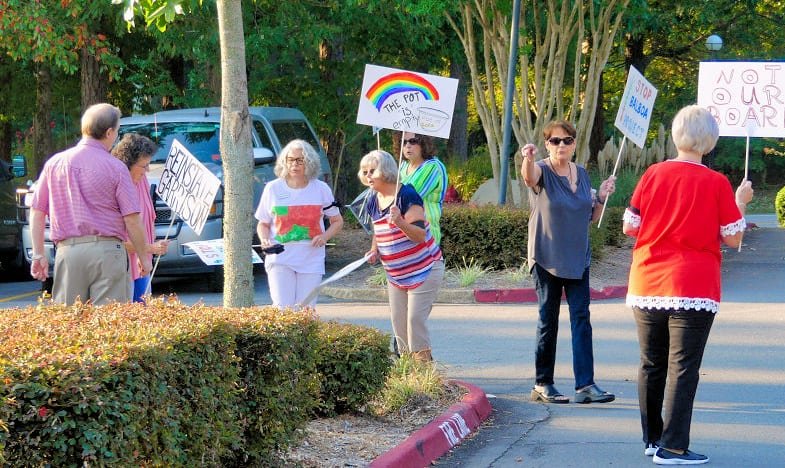 No Excuse for Vandalism or Violence in HSV

The Hot Springs Village Board of Directors meeting on September 18, 2019, was momentous on several levels.  Two main issues attracted a standing-room-only audience. The first issue was the ousting of Director Dick Garrison on September 13th.  The second was the proposed multi-million-dollar Balboa Golf Course and Clubhouse project.

Peaceful demonstration in support of Garrison

Emotions have been running extremely high during the past month over the Balboa project.  The ousting of Director Garrison added fuel to the fire. A well-organized, peaceful demonstration in support of Dick Garrison greeted Villagers arriving for the meeting.  This demonstration continued during the first half of the meeting where demonstrators quietly walked past the windows carrying their signs. They were only permitted to do so for a limited time but they made their point.  When requested to move to another area, they did so quietly and politely.

Early on, the chair remarked on the Garrison matter stating the same information that was in the Sunday e-blast:  that Director Garrison was dismissed for breach of confidentiality AND that the Board would have nothing more to say about the matter.  In my opinion, this statement was inadequate and did not address the issue in a meaningful way.  During the public comments part of the meeting, Dan Daddieco addressed the Board (with wisdom born of experience) and requested the reinstatement of Director Garrison, as we all have made mistakes in our lives and second chances give us the opportunity to correct them.  The room broke out in enthusiastic applause.

Board voted against Balboa projects

In a rare instance of good decision-making, the Board voted against going forward with the Balboa Golf Course and Clubhouse project, primarily because we don’t have the money.  Therefore, there will be no chemicals dumped on the Balboa Golf Course to kill the grass this fall, and the golf course will not be torn up this year.  It seems that most villagers and Board members agree that this kind of expenditure cannot be presented by staff in a half-baked format without proper studies being conducted to determine actual costs to be incurred, feasibility and financing.

John Cooper was met with applause and cheers

John Cooper III attended the meeting.  His introduction brought widespread applause and cheers.  He also spent some time with Villagers at the Woodlands Plaza.

Never any excuse for vandalism or violence

Director Buddy Dixon read excerpts from a September 5th letter received by all Board Members which contained threats.  He also stated that his car was keyed in the POA parking lot. A second incident involved the driver of a truck who deliberately tried to run down several demonstrators in the Woodlands parking lot, going so far as to jump the curb in the attempt.

This is very disturbing.  There is NEVER any excuse for vandalism or violence.