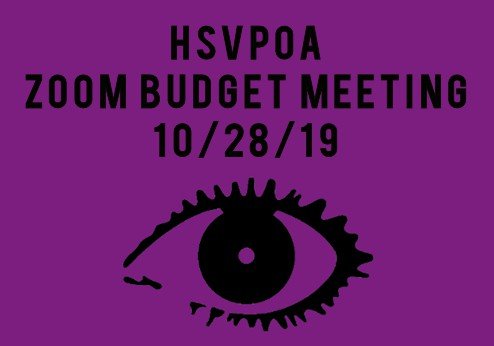 On Monday, 10/28/19, the HSVPOA Board of Directors CEO, Lesley Nalley and CFO Liz Mathis met for a Zoom Budget Meeting in the POA Conference Room.  All six Directors were in attendance.

Board Chairman, Cindi Erickson stated, “The purpose of the meeting is to regain a consensus or at least a majority,” in preparation for a Special Budget Meeting where a vote will be taken to pass the 2020 budget.

Director Campagna stated that he feels the golf revenue projections are being overstated by approximately $750,000. He could live with some overstatement but wants this number brought down by $450,000, which could be achieved by a combination of reduction of both golf and nongolf expenses and the redirection to golf of some funds that were planned for reserves.

Director Podawiltz said that in addition to the overstatement of golf projections, the food and beverage category is also overly optimistic. Food and beverage expenses can only be reduced by so much.

Originally the Board felt that a continuation of the 2019 fee structure was appropriate. The Recreation Committee recommended that the 2019 yearly fee of $490 be lowered to $350 annually.  The logic was that with the higher fee, there would be fewer annual signups and less profit would be realized. In other words, the thought is that with lower annual fees we would at least break even and may even make a larger profit.

Director Buddy Dixon stated he researched this topic and interviewed a number of folks.  Dixon also prepared a detailed report with his recommendations.  Dixon concluded that the annual Fitness Center fee should be $399.  He originally felt it should be $400, but became convinced that $399 would be better.

Chairman Erickson asked, “Is it worth $50?”  The Recreation Committee put a lot of work and thought into their recommendation. Director Diana Podawiltz was also like-minded and felt the Committee made a sound recommendation and that the fee should be lowered to $350.

Director Podawiltz said she “hated to supersede the work of the committee.” Contrary to the findings of the Recreation Committee and Director Podawiltz’s opinion, the majority of the Board supported a $400 annual Fitness Center fee.

CEO Nalley stated that we may not be as competitive price-wise as some of the other local fitness center options because we may be offering more.  Are we offering the same features as the other centers or are our features superior?

Podawiltz said that the 2020 budget needs to be an austerity program.  She stated it is a problem that the budget does not deal with the elephant in the room.  This elephant is that we cannot justify adding another accounting person to the staff when new timesaving paperless software is budgeted to be purchased for this department.  This additional employee will be in charge of surveying our buildings.  Podawiltz stated that with the new and improved software being budgeted for the accounting department, we should need fewer people on staff and not more.

CFO Mathis countered that she has already reduced the staff by two in the past three years. CEO Nalley added that this is also in addition to a previous cut of two people in the accounting department.

Campagna said, “It is our job to come up with a revenue line and an expense line.”

Podawiltz stated that our problems for operating are that:

CEO Nalley asked, “Where is the thought on how much people get for $68 a month?” We are not doing enough to communicate this message.

Campagna stated it was up to the CEO to work within the budget approved by the Board and not up to the Board to manage operations.

In regard to cutting costs, Director Dixon inquired, “If we close a golf course, how much money do we save per day?”  The staff did not have those figures on hand but agreed there would be savings and that it also depended on which course would be closed.

It was agreed that if there was enough demand for golf, that courses should remain open.

When asked who would be willing to pass the budget next week with the above items established, Podawiltz was the lone dissenter.

It was decided there would be a final 2020 Special Zoom Budget Meeting next week on Tuesday, November 5, 2019, at 3:00 p.m.  This meeting will also be held at the POA Conference Room. The public is invited to watch on their internet devices.

“To view the meeting visit https://zoom.us/j/735072877 and click “Save File” to download Zoom_launcher.exe. From there, you will need to find the Zoom file in your downloads, open it and follow the prompts.

Recreation Committee Chairman, Donna Aylward, gives a presentation to the Board Directors and staff on 10/16/19