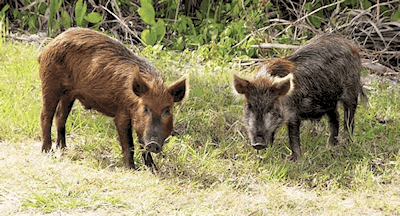 Invasive feral hogs have been sighted in the Village.

Feral hogs are one of the one hundred worst invasive species in the world today (Lowe et al. 2000). The feral hog population has grown rapidly in the United States and has become a huge problem in many states including Arkansas.

According to the Arkansas Game and Fish Commission, “Feral hogs are not native to the United States. They are an invasive species, a public nuisance and a threat to Arkansas. ” Mar 15, 2018

Jim Langford emails board about feral hogs in the Village

Jim Langford sent the following email to the Board Directors and Village Voice concerning this disturbing issue:

“I have not seen a CWAO “Chief Wild Animal Officer” listed in the CEO’s Organization Chart so I am sending this to you, our Board of Directors.  We have wild feral hogs in the Village.  Full-grown hogs have been seen in several places in the Village and piglets have been seen on Ponce de Leon near the fire station.”

Farm Journal/ AG Web reports: according to State officials, they “estimate there are roughly 200,000 fast-breeding feral hogs spread across the state’s 75 counties.”

Feral hogs are prolific, reaching sexual maturity as young as three (3) months to one year. The estrus cycle of the female occurs every 18 to 24 days if the female is not pregnant. She is capable of birthing from one (1) to twelve (12) newborns, with an average of four (4) to six (6) piglets. A pregnancy can last from 100 to 140 days. As the female ages, the possibility of larger litters increases until she reaches the age of four (4) to five (5), at which time her litter size may decrease. A sow generally has two litters a year and the oldest known age of a breeding female is 14.

The damage from feral hogs can be great

Feral hogs can potentially cause many problems in the Village. Some possible damages are:

Where are feral hogs in Arkansas?*

While this incident did not happen in Arkansas, this is an example of what wild hogs/pigs can do to a golf course.

We would like to thank Jim Langford for taking the time to write emails to the Board Directors and also the Village Voice. Hopefully, this issue will be addressed and this potentially devastating problem will be dealt with.

* Where are feral hogs found in Arkansas?