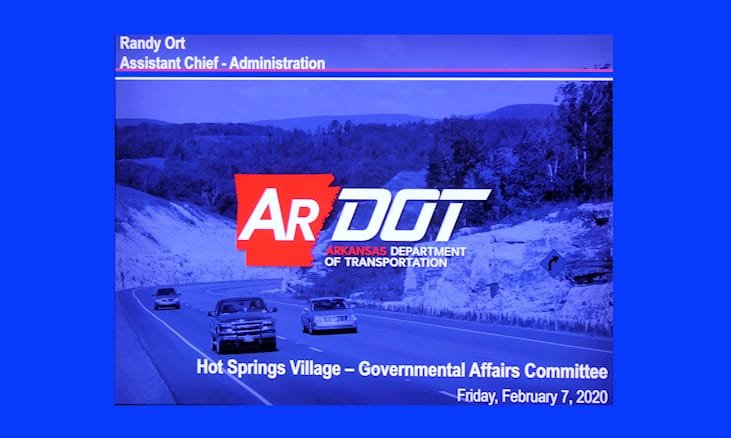 On February 7, 2020, the HSV Governmental Affairs Committee (GAC) had the privilege of receiving an update from the Arkansas Department of Transportation (ARDOT). The ARDOT representative focused on two areas The first was an update on the road work that is planned and/or occurring in the state. The second subject was Issue 1, which will be on the ballot next November. David Childs and Mike Medica were fundamental in arranging for the ARDOT presentation to the GAC.

One of Mr. Ort’s job functions is public relations and he travels around the state educating and updating Arkansans about the many projects ARDOT is working on or has recently completed. Mark Headley oversees all construction and maintenance activities for the six counties in central Arkansas.

ARDOT update on local projects that are completed, underway or planned for the near future

US Hwy 70 from I 30 over to Hot Springs is a big success. This is a project that has been on the radar since the 1960’s. McGeorge Contracting out of Pine Bluff completed the 18-mile project for $79 million.

ARDOT always strives to obtain a quality project, within the desired timeframe and budget. The above-mentioned project is one that came in meeting those three criteria.

There is also a six-mile Interstate 30 project which is also part of the Connecting Arkansas Program (CAP). This is being funded with the half-cent sales tax.

Ort said, that this is a $187 million project. Ort further explained, “For a conventional road project, this is the largest contract ever awarded by the Highway Commission.” This project will be completed in approximately three more years. One reason this project is so costly is that existing traffic must be maintained while the work is occurring. The four large bridges further exacerbate the price tag of an already costly project. In addition, ARDOT is redoing the Hwy 70 interchange and the Hwy 67 interchange.

Another upcoming summer project which is funded with the half-cent sales tax is an extension of the widening of US 270 west of Hot Springs, “basically where the four-lane ends.” The widening will be expanded for two more miles up to Fleetwood Drive. This project is roughly projected to cost $10 to $15 million dollars. This is another CAP.

The Hwy 7 corridor going north and south out of Hot Springs will be started this spring. This is a safety improvement job which will take a year or less to complete. This job involves widening shoulders, adding guardrails, and adding a turn lane or two.

Assistant Director Ort said, “You continue south on Central Avenue.” Within the last year there was widening completed from the Lake down to Hwy 290. “We’re about to begin a project to go from 290 on down, actually into the northern part of Hot Springs County and continue that four-lane widening.

Mr. Ort said, “We also have a project starting about a year from now. We’re going to add some more passing lanes on Hwy 7 from Arkadelphia on up towards the Garland County line – so a lot of work on Hwy 7.”

Mr. Ort explained that we have a couple of projects coming up on Hwy 5. One of them will go from the Garland County line back to Benton. This is approximately a 17-mile stretch, but work is not being done on the entire area. Just recently work was completed on widening some shoulders, adding rumble strips, and overlay. What is coming up is a safety job where some of the curves along this route will be addressed. Ten curves will be flattened or straightened and superelevation will be added.

Another widening project is scheduled this summer on Hwy 5 from Hwy 7 going out to Deerpark Road.

Mr. Ort said he was “amazed how much work in this immediate area [Hot Springs] is coming up in the next year.”

Ort elaborated, “The project I think everybody is talking about and everybody is excited about is the extension of the expressway going from Hwy 70 on the east side of Hot Springs, coming up north and tying in Hwy 5 and Hwy 7.” ARDOT and Garland County are partnering to pay for this project.

Ort said, “We’ve had partnering jobs back to the 1990’s, but I don’t know of anybody who has ever put $30 million dollars in.” This contract has been awarded for $75 million. ARDOT is paying $45 million from various federal and state funds. This project will start in the spring and is scheduled to be finished in the summer of 2022. The groundbreaking is Thursday, March 19, 2020.

This project is a two-lane roadway that does have an interchange at Mill Creek Road. But it’s what we call “controlled access.” This means there will not be driveways or intersecting cross streets. Eventually, if there are funds and the traffic justifies it, this will become a four-lane roadway.

A roundabout will be part of the Hwy 7 project. More information will soon be coming out about this project.

ARDOT Issue 1 to be decided in November 3 election

Mr. Ort said they are starting to raise the awareness regarding the election on November 3, 2020. “The Governor has his long-term highway funding proposal on the ballot.” Ort stated he was not campaigning but it was his job to make sure people have the correct information in order to make an informed decision.

Mr. Ort also said, “Issue 1 is part of the Governor’s long-range highway funding plan that he came up with and presented to the legislature last year. We’re trying to get people educated on the topic; make them aware of it. Get them interested in it so they will want to get some more information from whatever sources they choose. Come November, hopefully, they’ll be able to make an informed decision, whether it is yes or no. Issue one is really pretty simple.”

Ort said, “If it fails, then that sales tax will terminate and will go away, again, in June 2023.”

Mr. Ort said that ARDOT has a dedicated revenue source from the sale of fuel and registration of vehicles. Approximately 70% of ARDOT’s revenue comes from these user fees.

What is happening now is that consumers are reducing the consumption of gasoline. A major revenue source of ARDOT [sales tax on gasoline and diesel] is based on consumption, so the reduced use of gasoline is causing ARDOT’s revenue to decline. $9.3 billion has been identified as a funding necessity for ARDOT over the next 10 years. With flat revenue and construction costs increasing, there will be a shortfall of funds to meet the $9.3 billion needed. Projections are that about $4.5 billion that will be available. This leaves ARDOT with a $4.8 billion shortfall.

The $9.3 billion is considered to be true needs which are comprised of “taking care of the existing system, addressing true congestion issues” and things like that.

There are a number of big projects not mentioned in this report that are not included in the $9.3 billion number. If you include the totals for some of these big projects, this need number is actually over $20 billion.

Mr. Ort said, “This is truly what we need to do to take care of our system and to manage the traffic that we currently have. That is the shortfall that we see.”

After Governor Hutchinson came into office, he set up a Highway Fund Working Group. They said, “we need a target of $400 million in new revenue for highways each year. That was the target this group established but some legislators balked at this number. The Legislative Audit did a review and said it is actually $478 million dollars that are needed in new revenue for highways each year.

Act 416 passed last year which will provide $95 million in new revenue. The three sources of the $95 million are:

Ort said, “The biggest part of the $300 million plan is up to the voters to decide this November.